The US Vice President had just arrived in Vietnam on the evening of August 24 after the US Embassy in Hanoi said her flight was delayed a few hours earlier due to an unexplained health incident in Hanoi.

Ms. Harris, who had just finished a three-day visit to Singapore, was due to fly to Hanoi in the late afternoon of August 24, but was suddenly delayed by three hours due to “an unusual health incident.”

According to Reuters, “unusual health incident” is the term the US government often uses to describe Havana Syndrome, a condition with symptoms such as dizziness, nausea, migraine headaches and memory impairment. So named because it was first reported by US officials at the US Embassy in Cuba in 2016.

“The office of the Vice President is aware of a report of an unusual health incident that may have occurred recently in Hanoi, Vietnam,” the US Embassy said in a statement.

“After a thorough evaluation, it has been decided that the Vice President’s trip may continue,” the statement said, without elaborating.

A spokesman for Ms Harris declined to comment on the reason for the delay to Reuters. The Vietnamese side and domestic media have not given any information about this delay.

“This has nothing to do with the vice president’s health,” Harris spokeswoman Symone Sanders told reporters on a flight to Vietnam. 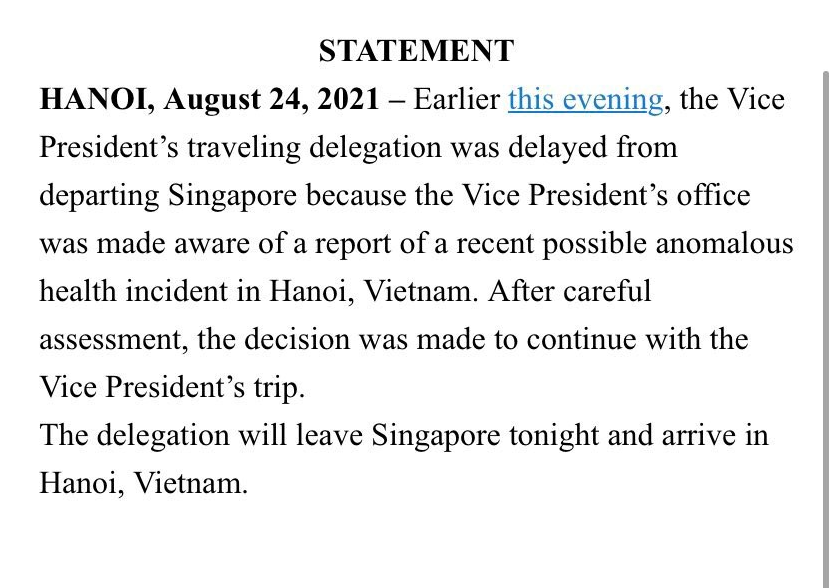 According to NBC’s Josh Lederman’s own source, at least two employees of the US Embassy in Hanoi will have to leave Vietnam after the “Havana Syndrome” incident over the weekend.

The director of the US Federal Bureau of Investigation, William Burns, said about 100 CIA officers and their family members were among 200 US officials and their relatives suffering from “Havana Syndrome,” according to Reuters.

A panel of the US National Academy of Sciences in December found that one plausible theory was that beams of “directed energy” caused the syndrome, Burns said.

According to the British news agency, the director of the CIA also said that there is a “very high probability” that the syndrome was intentionally caused and that Russia could be responsible, adding that he was withholding the final conclusions pending further investigation. Moscow denies any involvement in this.