Human Rights Watch accuses the Vietnamese government of blocking and restricting the movement of activists and dissidents. Those prevented from free movement confirmed this happened publicly over the years.

On February 17, 2022, Human Rights Watch (HRW) held a report released at the Thai Press Club on the human rights abuses committed by the Vietnamese government towards local activists and dissidents. HRW considers the screening of dissidents from leaving their homes on “sensitive occasions” a “systematic and widespread” violation.

This has happened in Vietnam for many years, but according to Mr. Phil Robertson, deputy director of HRW’s Asia division, this is the first time a violation of citizens’ freedom of movement in Vietnam has been reported with specific records. He said at the press conference:

“These are clear examples of a system of repression and intimidation that makes Vietnam one of the worst abusing governments of human rights in the Asia-Pacific region. This is how the government threatens activists and their families, and tries to control them.

Only when intimidation tactics fail to work, does the Vietnamese state resort to arresting, prosecuting, and imprisoning dissidents.”

One dissident (temporarily unwilling to be named for safety reasons) told RFA on the morning of February 17, 2022:

“Today is February 17th, so there is a guard at my door right now. They used to have cameras pointed directly at my house. A few days they consider it to be as sensitive as the day of the loss of Gac Ma [South Johnson Reef in the South China Sea to China], the loss of the Hoang Sa [Paracels], and on February 17, there was a batch of plainclothes agents around the house.

When I tried to leave the house, I was pushed back. If I go on purpose, they call for more people and then surround me. When asked why they were arrogant and said insulting words. If I resist, they beat me, and the police around me will arrest me with the charge of ‘disturbing on-duty state officials.’ There are security guards with uniforms and plainclothes. They watch openly.”

Le Hoang, a person who has taken to the streets to protest against China many times, told RFA that the people who sit to watch and block are usually plainclothes from the ward and the district police, but those who are often guarded and blocked are not strange to them. He continued:

“I guess they have clear rules. For example, tomorrow, if you send soldiers to stay at home, they won’t let you go, they will block you from leaving the door. When I go out, they cause trouble and push me in. They gave about three or four people to watch. Like in my case, they are four people. When I try to go out, they push me in right away; they do all sorts of things right away, it’s not like we can’t go there on purpose. In milder cases, for example, when people want to go out to commemorate the battles against China, they don’t block anymore, but they let about two people follow, then film and take pictures.

I think they filmed, took pictures to report first; The second is to make me afraid. We all know well that the burning of incense and commemoration cannot be stopped because it is our indisputable right.

If I tell them that their acts are a violation of human rights as I don’t have a problem with supervision or a violation of probation, but they don’t answer.”

“Banh canh” is a term that dissidents and human rights activists use to refer to the situation of being held de facto under house arrest and the houses are guarded by security at the door.

Activists are placed under house arrest on occasions such as party congresses, congressional meetings, US officials’ visits to Vietnam, anniversaries of the China war invasion of the northern border, naval battles in the Hoang Sa, Gac Ma or before the trials of dissidents, etc. have happened many years ago and victims could only speak out through social networking sites. The government side ignored it, neither acknowledged nor denied. The Vietnamese government is accused of defying international law and public opinion on human rights issues.

In early 2019, when Vietnam hosted the US-North Korea Summit, more than a dozen prominent Vietnamese political activists in Hanoi told Reuters that police had stepped up surveillance and prevented them from leaving their homes.

In early 2021, a few days before the 13th National Congress of the Communist Party of Vietnam opened, many dissidents and critics were watched by security at their doorsteps. Doctor Dinh Duc Long is one of them. He told RFA:

“Legally speaking, if we go out of the house and they obstruct the movement of citizens, they are violating it. If they just watch without hindering me, that’s their business. Actually, it doesn’t matter. There are no orders and no court judgments. They kept watching to see if I was doing anything. As a deterrent, prevention is key.

Of course, I feel uncomfortable. When I found out about the incident and I took a picture and posted it on Facebook, some guys even walked past the door swinging their arms and legs and peering into the house. I liken that action to the action of a Chinese warship defiantly patrolling in the South China Sea. Threatening, looting, killing fishermen who live and work honestly in Vietnam’s sovereign waters for thousands of generations.

After I did that comparison on Facebook they pulled further. Thus, they have timely monitoring and adjustment. At least in my case.”

The human rights situation in Vietnam was assessed by HRW as not improving when Hanoi systematically punished activists who dared to speak out publicly about the state of the country. At least 63 people are imprisoned in 2021 alone for expressing their opinions or joining associations and groups considered by the state to be anti-government. Among them, many received very heavy sentences after unfair trials based on fabricated accusations.

In addition to HRW speaking out about the human rights situation in Vietnam, on November 1, 2021, the United Nations special rapporteurs sent a letter to the Government of Vietnam to ask for information on arrests, detention, and conviction against a number of activists in Vietnam in 2020 and 2021.

On December 21, 2021, the Permanent Mission of Vietnam to the United Nations and the World Trade Organization sent a letter requesting an extension of the response period until February 28, 2022.

Millions of people have watched our news and programs. More and more people choose to support us. Because there is an urgent need for an independent, critical voice in the media for Vietnam.

Your support will help everyone to have free access to thoibao.de. Because we consider the press not only a communication product but also a beneficial activity for the community.

There have been tens of millions of people every month who do not have to pay any money to read news on thoibao.de, but as you know, we have to invest a lot in order to have quality journalism. That’s why we need your support. 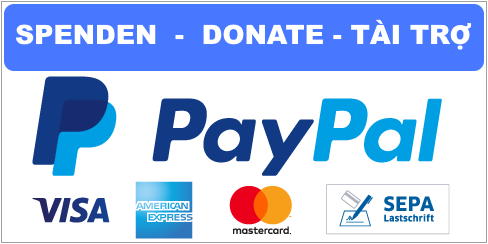 Thank you very much