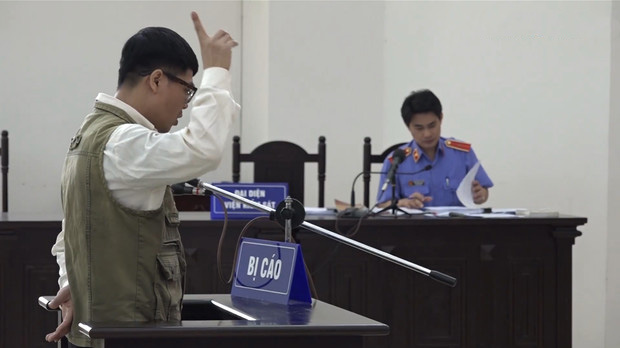 Court brought citizen journalist Le Trong Hung to an appeal hearing, his family did not know.

The Higher People’s Court in Hanoi has just brought a journalist and independent National Assembly candidate for an appellate hearing without notifying his family or his lawyer, on the contrary, allowing security personnel to guard his family and other human rights activists over two days in a bid to prevent them from gathering to the court’s areas.

On April 22, the wife of citizen journalist Le Trong Hung, Mrs. Do Le Na, said that she had not received any notice from the court, but only when she went to the temporary detention center where her husband is held in order to provide him with some supplies, prison officials said that her husband was put on the hearing.

Ms. Do Le Na told a reporter of Radio Free Asia about the incident as follows:

“On April 19, I stayed in my house so I don’t know if plainclothes agents were sent to a station near my house, but at noon, around 11 o’clock when my son came home from school, he said that someone monitoring their house.

After my son and I finished eating, a friend of Mr. Hung sent a message to ask whether my husband’s appeal hearing was carried out today.

It is known that this person was also stopped by security on April 19, and was told by a security officer that the reason for being placed under de facto house arrest was because that day Mr. Hung’s appeal hearing was taking place.”

Mrs. Do Le Na said that after hearing the news, she went online to search for information but could not find information about her husband’s appeal hearing.

And it was not until April 22, when Mrs. Na went to the detention center to find out, that the above information was verified. She said:

“Today, after arranging family matters, I decided to go to prison No. 1 to first send things to my husband, and secondly, I assumed that my husband would not file an appeal so my family will be allowed to visit him, so I asked for visitation information.

After I presented this, the prison staff told me to wait for them to check his case, after waiting for a few minutes, they came to see me and said that it was true that my husband’s appeal hearing was held on April 19.”

However, according to our research, only the Procuracy magazine – the agency of the Supreme People’s Procuracy reported this hearing on April 20, and gave the reason for the appeal hearing was because Mr. Le Trong Hung had an appeal that he did not commit a crime under Article 117, but under Article 331, ie “abusing democratic freedoms and infringing upon the interests of the State.”

According to the above news, the trial panel said that Mr. Hung’s behavior was “very serious because it directly infringed on national security, defamed the people’s administration and the socialist regime, causing disability in the field of cultural ideology and the unification of the political and ideological foundation of the country, affecting the public’s trust and the State’s political institutions.”

Therefore, Mr. Hung’s sentence of 5 years in prison and 5 years of probation was upheld.

When asked how she felt about the fact that the government brought her relatives to the hearing but did not announce it, Mrs. Do Le Na said:

“After my husband’s first-instance trial, I thought that all the trials of the Hanoi authorities were just a joke, and I considered that the trial and the sentence they imposed on my husband was unreasonable.

However, today, when it was officially confirmed by the prison that there was such an appeal hearing taking place in such a public manner, no one expected it, to be honest, my feeling, can’t be said not to be angry.”

Responding to a reporter’s question from Radio Free Asia about the legal basis for the government to hold a secret hearing like the case of Mr. Le Trong Hung, lawyer Ha Huy Son of the Hanoi Bar Association said: the current law does not require the court to notify the family when a defendant is being tried.

Meanwhile, after the first-instance trial ended, the defense lawyers also had no power to protect Mr. Hung’s interests, so they were not provided with any information about his condition.

Mr. Le Trong Hung, born in 1979, is a former teacher, known to many people after participating in independent journalism, especially a live broadcast on Facebook and YouTube, called CHTV. The main content is to criticize policies and denounce corruption and wrongdoings in land seizures.

Mr. Hung often bought the current Constitution of Vietnam copies to distribute to the people, at the same time submitted his candidacy for the 15th National Assembly in 2021 and promises to campaign for the establishment of a constitutional court if elected.

Mr. Hung was later taken into custody for allegedly committing the crime of “spreading anti-state documents” before the National Assembly elections took place.