Trang chủ 2022 Tháng Tám 21 ENGLISH Vingroup, owned by Vietnamese billionaire Pham Nhat Vuong, has “terrible” debt and has been handled for tax violations of tens of billions of dong

According to Vingroup’s consolidated financial statements for the second quarter of 2022, the company recorded net revenue of VND32.08 trillion ($1.44 billion) in the first six months of 2022, down nearly half from VND60.74 trillion on year. Mr. Pham Nhat Vuong’s business reported a gross loss of VND4.36 trillion, while in the same period last year the company made a gross profit of VND13.74 trillion.

In the first 6 months of the year, Vingroup’s financial expenses stood at VND7,05 trillion, of which mainly interest expenses and bond issuance accounted for VND5.15 trillion. During the period, the company also recorded a joint venture and associate loss of more than VND46 billion and a net loss from business activities of VND1.92 trillion compared to a profit of VND6.42 trillion in the same period last year.

As a result, Vingroup Group recorded a profit after tax of VND1,03 trillion in the first 6 months of 2022, down more than VND400 billion compared to the same period last year.

As of the end of June 2022, Vingroup’s total assets stood at VND508.61 trillion. In which, short-term receivables were at VND100.3 trillion, and inventories were at VND68.66 trillion.

At the same time, the Vingroup Group of billionaire Pham Nhat Vuong has a debt of VND376,602 billion, 2.85 times higher than the owner’s equity. In which, tax debt and other payables to the State amounted to VND8.34 trillion, an increase of nearly VND2.7 trillion compared to the beginning of 2022.

According to financial experts, the fact that liabilities are nearly three times higher than equity means that Vingroup’s operating capital is almost debt.

Although the use of debt also has advantages, that is, the interest expense will be deducted from corporate income tax, in the long run, the debtor enterprise will be exposed to interest rate and exchange rate risks (if borrowing foreign currencies) and inflation.

Regarding business risk, the enterprise will bear the fluctuation of input materials and output selling price. Therefore, businesses must consider the financial risks and advantages of debt to ensure the most reasonable ratio.

According to the reporter’s research, Vingroup is considered the largest private enterprise in Vietnam, currently led by Mr. Pham Nhat Vuong as Chairman of the Board of Directors.

In early August 2021, the Hanoi Tax Department issued a decision to sanction Vingroup with administrative violations and collect arrears for the tax inspection period from 2017 to 2019 with a total amount of more than VND31.3 billion. In which, the amount of tax arrears is VND15.86 billion; late payment of taxes and administrative fines is VND15.47 billion.

Previously, in August 2017, during the tax inspection period from 2014 to 2016, the General Department of Taxation (Ministry of Finance) arrears the corporate income tax of Vingroup Group of VND333 million, and the amount of late tax payment and administrative fines is VND81.6 million.

Note: The original article “Tạp chí Doanh nghiệp và Kinh tế xanh” in Vietnam was removed after being published for about 3 hours. 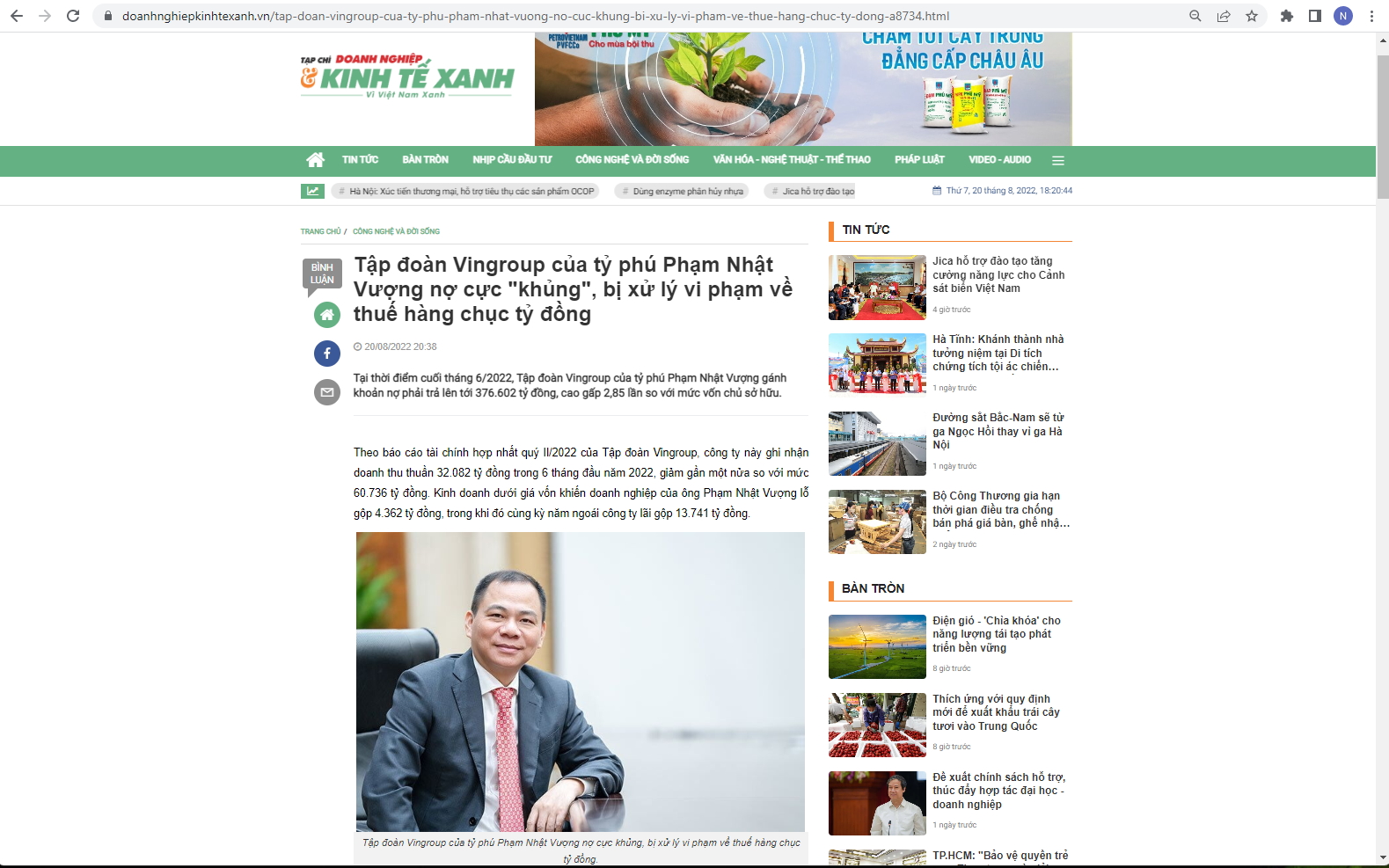